10 Things we Learned from Oracle OpenWorld 2019 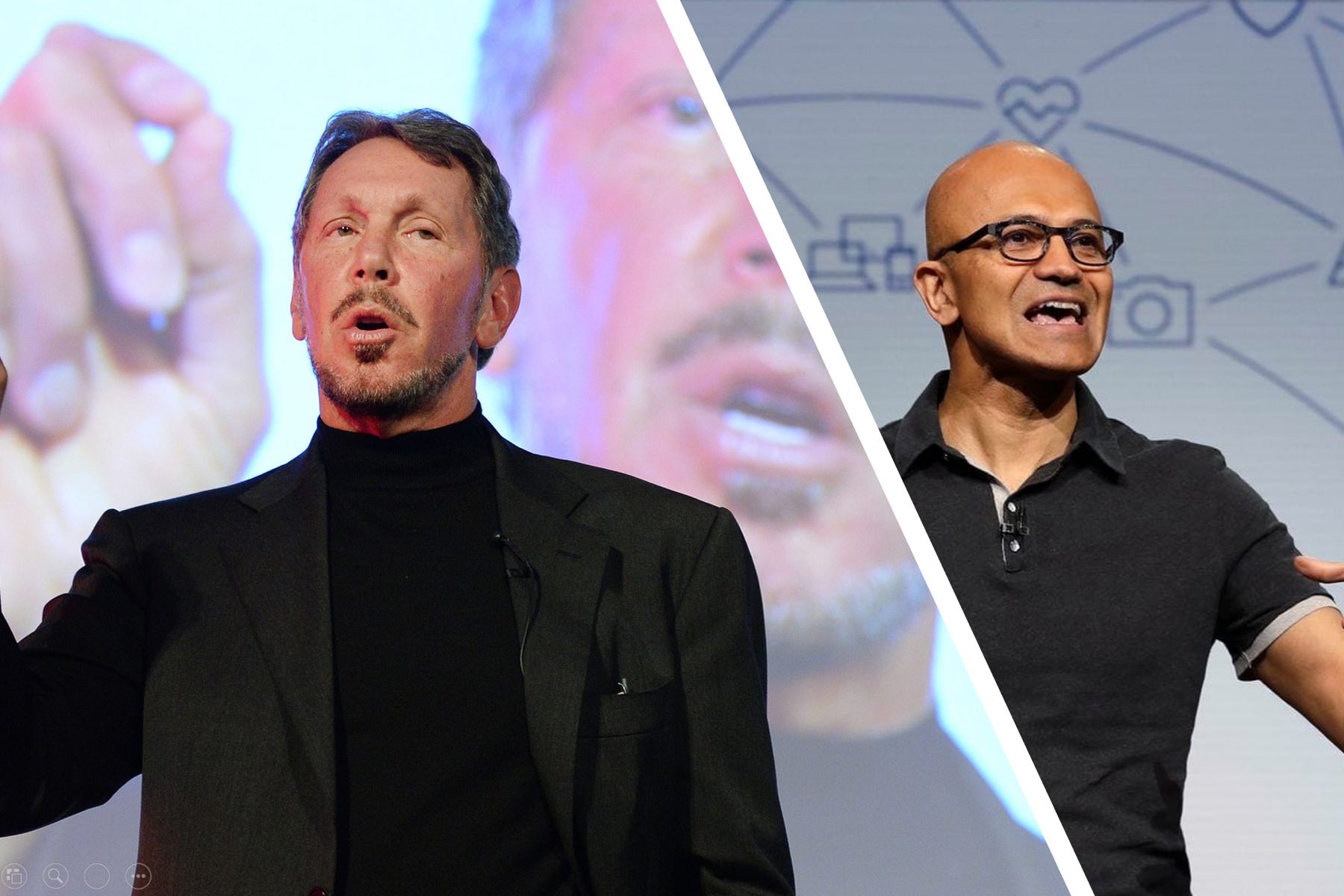 We’re just back from a terrific Oracle OpenWorld conference in San Francisco (Sept 16-19, 2019). For us, this was an especially gratifying conference as our clients won five innovation awards, and we were also featured in a major press release highlighting the developing partnership between Oracle and Microsoft.

So, to break down the conference into bite-sized chunks, here’s the top 10 things we found most interesting coming out of OpenWorld last week:

1.  Game-on, Oracle and Microsoft vs. Amazon

There were a lot of big announcements this year at OpenWorld. And it was clear that Larry was genuinely excited, showing slide by slide why being first to market isn’t the most important thing. Being the best is what matters. And the newly expanded alliance between Oracle and Microsoft promises to pass by Amazon in the Enterprise cloud space. For any customer running Oracle or Microsoft applications, there’s almost no reason to even look at AWS anymore. There are faster, cheaper, and more secure options. And Oracle and Microsoft have them.

What’s fascinating is that this partnership is real. It’s not a marketing stunt and is already manifesting itself in impactful solutions, and promises to get deeper and deeper as time goes by. And we know, because we are a part of this new eco system, integrating Microsoft Teams with Oracle Digital Assistant.

For anyone who is a history buff, you’ll know that every industrial revolution was sparked by a new development in autonomy. Whether that was spinning cotton or making cars, if you could automate what were once manual processes, you had a revolution on your hands!

Yes, Oracle has pulled off the double whammy, an autonomous database sitting on top of an autonomous operating system. And to make matters even worse for Amazon and IBM, it’s faster, cheaper, and more secure than all of Oracle’s competitors (as Larry mentioned, without human pilots there’s no pilot error – or cost). In fact, you can’t beat the friendly new pricing model for autonomous Linux. It’s free! And it’s even a simple one step configuration change to switch from IBM Linux.

“When you use Oracle Autonomous Linux in the cloud, the price is just right: It’s free,” Ellison said. “So if you’re paying IBM, you can stop.”

“I’ll give you one simple rule to prevent data theft. Put your data in an autonomous system. It’s the only rule I can come up with. Only thing anyone’s come up with so far. No human labor. No human error. No data loss. That’s a big difference between us and AWS.”

Larry also brought attention to the fact that the most expensive aspect of Enterprise software is the people at every organization that support it. People are much more expensive than machinery, and therefore automating what humans do doesn’t just make systems more reliable, it also makes them cheaper to run.

So, if we now have an autonomous database, and autonomous Linux, then why not also include autonomous subject matter experts: Digital Assistants?

This is the realization of the next industrial revolution (putting a back office HCM solution on someone else’s server is not a revolution). An autonomous Cloud, with autonomous robots answering questions and performing tasks will soon become the new normal. All accessible in multiple languages and multiple channels. Like Microsoft Teams, for example. Suhas Uliyar, VP of Bots and AI at Oracle, and his team, have created an incredible product with Oracle Digital Assistant, and it was on full show throughout OpenWorld. And the future roadmap is amazing. Oracle is investing heavily in AI for the benefit of all their clients. On-premise or cloud.

At IntraSee we have also fully automated the creation of Oracle Digital Assistant skills in a hybrid cloud environment. Such that it can interact with all your Enterprise systems, Cloud or on-premise.

Check out this video of an automated conversation within Microsoft Teams using Oracle Digital Assistant skills created autonomously by IntraSee.

A lot of people were very happy to hear that Oracle’s unique Cloud at Customer option is now being upgraded to “Gen 2”, which means it will also be on the autonomous stack. Even the database will be running the autonomous database in the upcoming months.

So, what is Cloud at Customer?

“Cloud at Customer allows you to take the best database, Oracle autonomous database, on the best cloud infrastructure, Exadata, and put it into your data center behind your firewall.”

5. More Regions Than Amazon This Time Next Year!

Well, who saw this coming? This is huge for many clients. Oracle is now promising that by next year they will surpass Amazon with the number of regions they support. All running their autonomous cloud. And that magic number is 36 total regions. That’s a massive expansion from the existing 16 regions. Which compares to Amazon’s 25 regions. If Oracle can pull this off it will drastically change the entire cloud landscape. Especially if Oracle can keep to the commitment to provide their entire stack in each region.

“All the services are available in all our clouds and that’s our policy. Amazon doesn’t do that. Amazon has some services some places, some services elsewhere. When we meet next year, we’ll have more regions than AWS. It’s stunning, it’s absolutely stunning.”

For those clients still using PeopleSoft, the great news was that Oracle is still investing heavily in the entire stack. Plus the rolling support still continues, meaning PeopleSoft is supported until at least 2030, and probably beyond. Paco Aubrejuan gave a terrific presentation and highlighted IntraSee as a key member of the chatbot eco system. He also called out our client Honeywell as a customer success story showing an on-premise PeopleSoft system fully, and securely, integrated with Oracle Digital Assistant in the Cloud. In fact, around 12 minutes of his 45-minute session was dedicated to chatbots/digital assistants.

The other item that received the bulk of the attention was a bundled third-party tool called “Kibana”. It looked really impressive and is an offline data visualization tool that has built-in PeopleSoft security awareness. And, like autonomous Linux, it’s free!

The astonishing thing is that if you were an organization that moved to Workday from PeopleSoft, you have less modern UX options now that you are with Workday (who don’t have a chatbot/digital assistant at all). Well, hopefully you signed a three-year contract and not a five-year one.

Larry focused on Salesforce, SAP and Workday, when discussing the state of the “opposition”. Salesforce got dinged for being very expensive, lacking in a full suite, and having inherent security holes (multi-tenancy) built into their software solution. This was why an errant SQL script recently opened up access that allowed different customers to see each other’s data. Something that would be impossible to happen in an Oracle cloud.

SAP got dinged for not really having any real cloud applications at all. And Larry thanked them for that! Certainly, it will be interesting to see how many European clients move from SAP to Oracle in the next twelve months. Our guess is that it’s a lot.

And, of course, Workday got hammered for having no cloud infrastructure of their own, and no technology Platform-as-a-Service. Meaning they are a SaaS-only solution running with a “tired” UX and no digital assistant/chatbot solution. Even as the entire world sees that we are now moving to conversational UI being the dominant UI for self-service by the end of 2020.

This may be Oracle’s most underrated product in the Cloud. Though it did get some more attention this year, and Larry even included it in a slide for his keynote. It mostly gets promoted by Oracle as a marketing tool. But it’s actually much bigger in capability than that. If anyone is looking for a portal-like technology in the Oracle cloud, then this is it.

Hopefully next year we’ll see Oracle Content & Experience Cloud (CEC) get credit where credit is due. But we think, for clients who are running on-premise portals like PeopleSoft Interaction Hub or Oracle WebCenter, that moving to Oracle CEC is a great way to transition into the cloud.

Remember when Apple switched from the multi-colored Apple logo, and went to a monochrome look? Well, this may be even bigger! The stark Oracle red and white is no longer a thing anymore. Welcome to Oracle’s softer and gentler new theme that was on display everywhere at OpenWorld this week.

So next time you go to Oracle.com you’ll be in for a very pleasant surprise. This is the new Oracle. A company focused heavily on automation and the user experience. The new mantra is faster, cheaper, better, and more secure. And that’s a great focus for any company.

Everywhere you went at OpenWorld there was some reference to Digital Assistants. Gartner is predicting 2020 is the year that it hits the mainstream and heads widely into the entire Enterprise. Oracle also thinks so. And we do at IntraSee too. In some ways 2019 reminds us of 1998. That was the end of the client-server era. Web systems were about to dominate and Google was founded, and very quickly defeated Yahoo and won the search engine wars. And, by the way, they did this through having a fully automated search solution (Yahoo were massively manual-oriented).

Going into 2020 it’s clear the web will take a back seat when it comes to self-service tasks for employees, managers, students, faculty, and advisors.

Conversational UI’s will be driving interaction with all your Enterprise systems. Automated conversations running on an automated cloud isn’t the future anymore. It’s a reality that can now be implemented today. Well, if you choose Oracle as your platform that is.

Also, on a personal note, we did get to speak at the conference jointly with Oracle on the subject of chatbots/digital assistants. And one of our clients, Honeywell, also got to present at multiple sessions. It was a great conference, and we enjoyed meeting everyone there.

And, of course, if you’d like to see a demo of what the future (2020) looks like, please let us know and we’d be happy to oblige.